As work continues on a massive redevelopment of the former Model Tobacco complex in South Richmond, the developer behind the multimillion-dollar project is facing a federal lawsuit from two of his investors.

Filed Tuesday in the U.S. District Court in Richmond, the suit accuses developer Chris Harrison of committing fraud and money laundering in an effort to wrest control of the project from the two investors.

The suit alleges that Harrison induced the investors under false pretenses into putting more than twice the amount of money into the project than they’d originally agreed, then tricked them into changing its management structure with the intention of diluting their interests in the project. 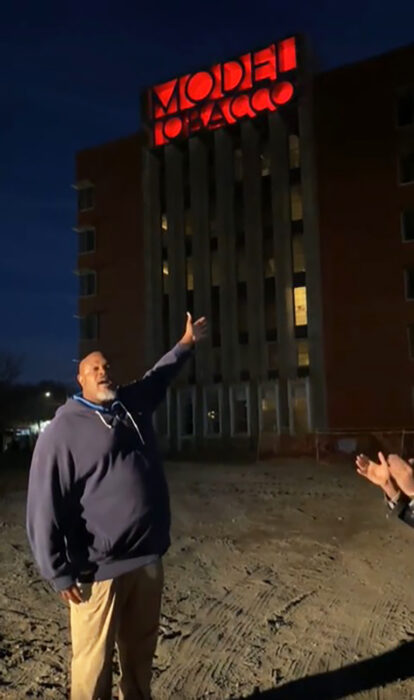 Developer Chris Harrison at a ceremony in December when the building’s signage was illuminated for the first time in decades. (Model Tobacco Lofts video screenshot)

Snider and Kuehn were investors in another Harrison project in D.C. when Harrison approached them about investing in Model Tobacco, according to the suit. The investors agreed, in late 2017, to invest $1.6 million into Model Tobacco and formed a development group with Harrison to control their relationship.

The suit alleges that Harrison violated the group’s operating agreement with multiple financial transactions that required the investors’ approval, misrepresented the project’s readiness and timeline, and ultimately induced them to put $2.2 million more into the project following delays with financing and the property’s closing.

The investors allege that Harrison told them that the closing would occur in early 2018, representing to them that the project – a redevelopment of the Art Deco-style building and 15-acre complex into 275 income-based apartments – would be complete by 2019 and they would start seeing returns on their investment later that year.

Harrison wouldn’t close on the property until mid-2020, three years after putting it under contract.

The suit goes on to allege that Harrison created a fraudulent company in an effort to bring other investors into the project and essentially steal it away from Snider and Kuehn. It alleges false documents were created to secure Snider and Kuehn’s signatures to authorize changes to the group’s operating agreement and power structure, reducing their interests and control over the project.

The suit claims racketeering, breaches of contract and fraud, and seeks Harrison’s dissociation from the development group. It seeks a jury trial and award of damages, including the nearly $4 million in initial investment and additional capital put into the project.

Harrison is named individually as a defendant in the case along with three business entities, including his Maryland-based C.A. Harrison Cos.

Harrison was reportedly served with the suit Wednesday. Requests for comment left on his mobile phone Wednesday and Thursday were not returned. 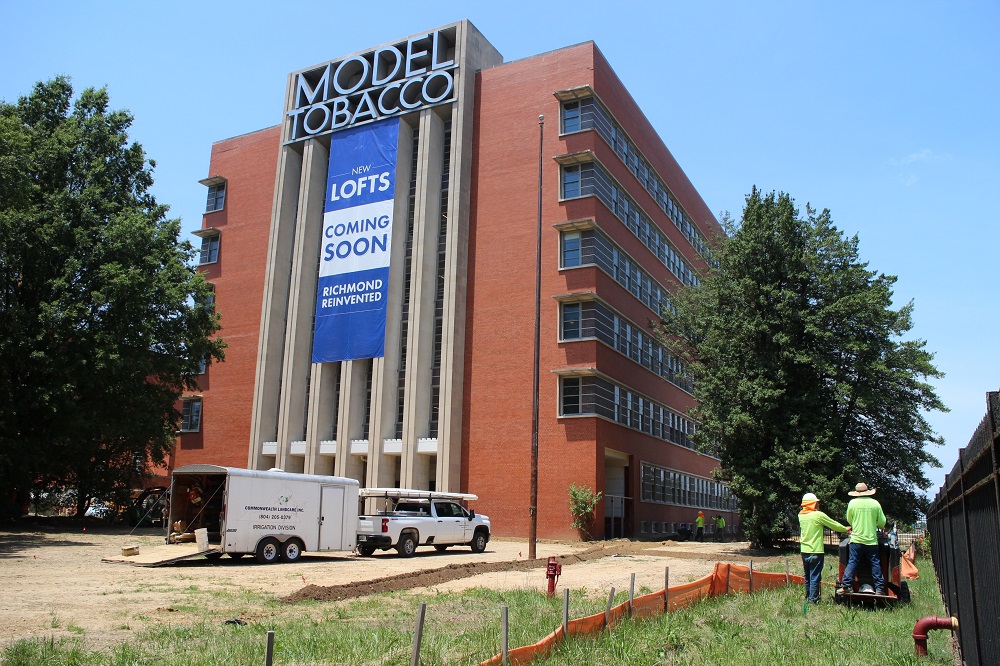 Workers were active at the site this week.

The 55-page suit was filed by a team with the D.C. office of Quinn Emmanuel Urquhart & Sullivan. Lead attorney Keith Forst said Harrison will have 21 days from the date of service to respond to the suit.

In an interview Thursday, Forst described the suit as “a step of last resort” after unsuccessful back-and-forth between his clients and Harrison.

“Our clients naturally want to be made whole in their investment,” Forst said. “They’ve put in over 100 percent of what they intended to, a total of $4 million now.

“Nobody ever wants to litigate. Nobody ever gets to a deal thinking it’s not going to end up where it should end up, especially when you’re doing business and you go in and believe and trust your partner,” he added. “Ultimately, Steve and Mike’s companies, they want to see (Model Tobacco) be successful. They view it as a ton of value and opportunity for Richmond.”

The case follows other lawsuits filed against Harrison on other development projects – including the D.C. project that involved Snider and Kuehn, and perhaps most notably, Harrison’s stalled redevelopment of the former Ramada Inn building in Petersburg.

Litigation remains active in both of those cases, with Harrison appealing a ruling in the investors’ favor in the D.C. case, and the City of Petersburg suing Harrison for building code violations. 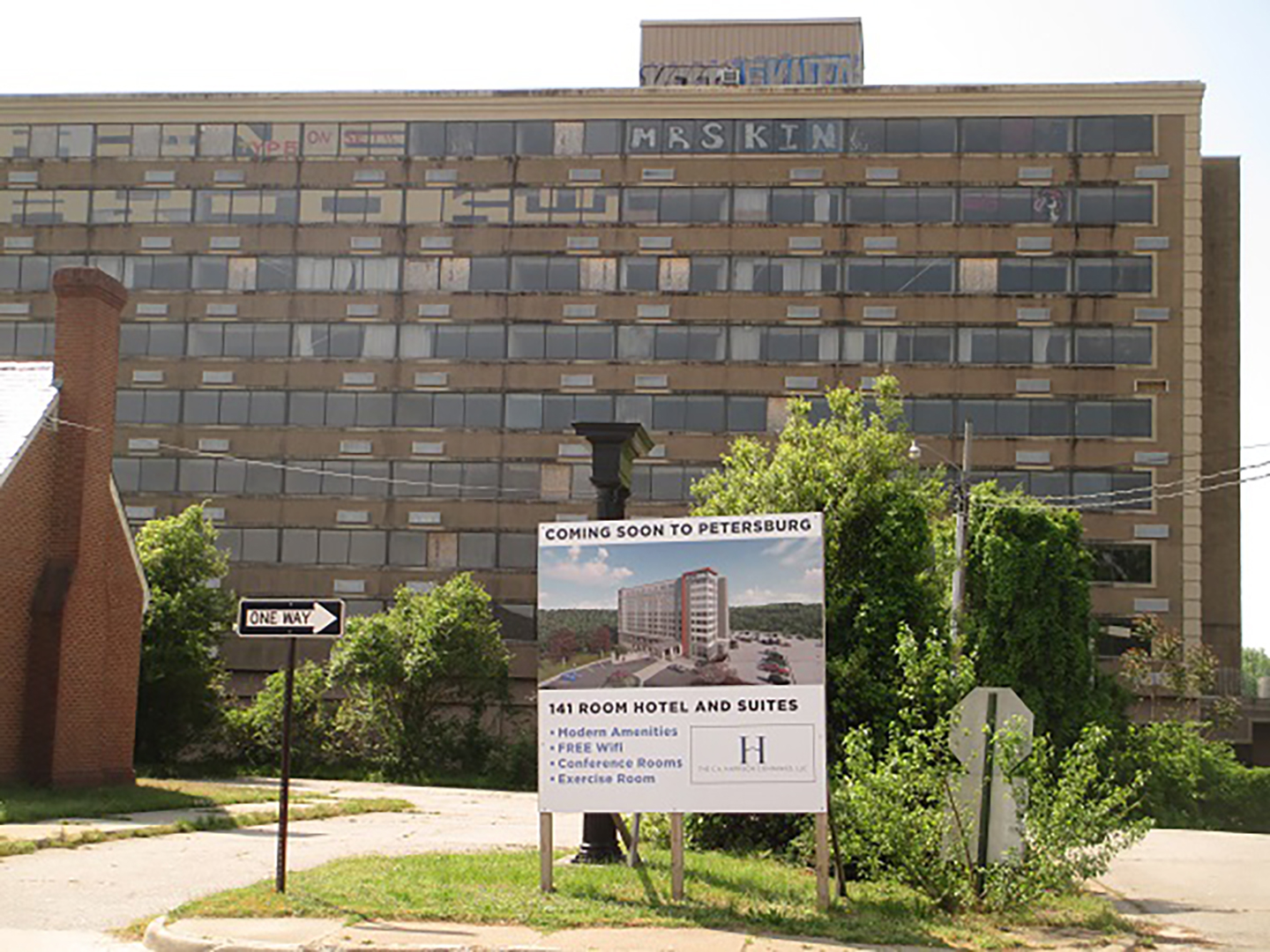 Work on the former Ramada Inn in Petersburg has stalled while the Model Tobacco project has progressed. (BizSense file)

In an initial hearing in December, Petersburg was granted a summary judgment that ordered Harrison to abate or remedy the violations within six months. That window is set to close June 8. A subsequent hearing in the case is to be scheduled.

Forst said the three cases show a pattern of fraud by Harrison that the Model Tobacco lawsuit aims to bring to light.

“From Petersburg to here to D.C. to a lot of potential developments that should be successful, (Harrison) has been playing a variety of games and, in our clients’ view as stated in the complaint, fraudulently inducing not only them but others to invest in projects that unfortunately aren’t as successful as he makes them believe,” Forst said.

“I think our clients feel some obligation to shine a light on it and (that) it’s time to put this out there and make people aware of what they believe is a person who’s trying to do things on false pretenses in an area that is important to them.”

Meanwhile, work appears to be progressing at the Model Tobacco site, where landscapers and other workers were active this week. Large banners advertising the apartments, called Model Tobacco Lofts, are displayed on each end of the main building, and photos and videos posted on social media show construction progressing. An open house for prospective tenants is scheduled later this month.

Harrison said in 2020 that the project’s first phase was estimated to cost about $59 million. The phase involves bringing 203 of the apartment units online in the building, along with an event space and amenities in the site’s former power plant building. Plans also call for an entertainment venue with a beer garden and restaurant space.

Mark Turner Construction is the contractor on the project, and Walter Parks Architects is the designer. John B. Levy & Co. arranged the financing through Allegacy Federal Credit Union, with additional financing provided by Virginia Housing.